Eleven-time world surfing champion Kelly slater has opened up about his passion for Brazilian jiu-jitsu, in an interview with Surfer Today. The apparently multi-talented Kelly Slater was introduced to the sport while in Brazil in 1982, and has come as far as recently earning his jiu-jitsu blue belt. Slater has showcased his serious skills in spars with jiu-jitsu black belt Flavio Canto, world champion BJ Penn and UFC light heavyweight champion Vitor Belfort, and has a pretty serious passion for the combat sport. 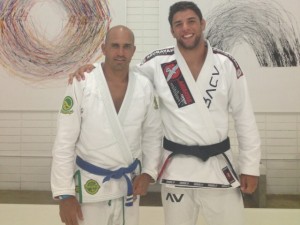 Slater’s passion for the martial art stems far beyond himself, adding a little bit of advice for parents; “I advise all parents to put their kids in Jiu-Jitsu classes before any other sport.”

And though surfing is undeniably Slaters calling, he seems to think the two are fairly similar. In a 2011 NY Times article, Slater compared jiu-jitsu to surfing: “Truth is, surfing is like a martial art. Good martial artists use the most efficient moves for getting the body to produce more energy. In surfing you have to master the same things – base, balance on your feet, the act of turning, bend and extend your legs. I love watching two guys fighting. It’s like human chess.”

Its great to see big names and successful athletes promoting Brazilian jiu-jitsu. It focuses on technique and leverage to teach fitness, self-defence, balance and co-ordination and truly is great for all ages.

If you’re interested in Kids Martial Arts classes, why not get in touch for a free trial!