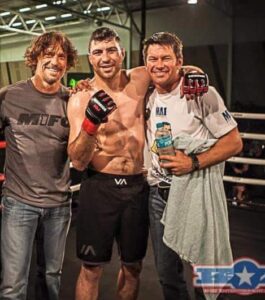 Dave Vergers is a MMA coach at M1FC at Osborne Park.

He first started his martial arts journey with traditional Japanese Jiu-Jitsu at the age of 16 in South Africa and progressed to MMA in 2001. He had his first fight in 2002 and remains undefeated in South Africa during his time there.

After moving to Perth he’s been mastering his passion for submission wrestling and Mixed Martial Arts at M1FC since 2009.
He is actively training and will be competing in MMA bouts in 2020.

When he’s not at the gym he’s a family man and an adrenaline junkie and loves to get out on the road on the bikes!

Experience/Credentials
– Fight record of 11 wins and 2 losses. This consists of 9 x 1st round finishes, 5 by submission and 6 TKOs.
– Japanese Jiu Jitsu Purple belt