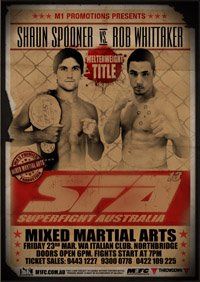 The WA Italian Club in Northbridge will be the venue once again as Superfight Australia hosts it’s “lucky number 13? show on Friday 23rd March and fight fans are in for a treat with another supreme line up of renowned interstate and local fighters.

Fans wanted this match up and now its here, between current SFA welterweight champion Shaun Spooner and rapidly rising star Robert Whittaker. Both fighters are at an international level and hold notable victories over Australian top contenders.

Fighting out of Bunbury MMA Fight Centre, Spooner secured the promotions welterweight title last October in just under 2 minutes with a rear naked choke victory over the well experienced Sydneysider Jon Leven and is currently on an 8-fight win streak.

Young gun Whittaker who trains out of PMA Super Martial Arts Centre recently defeated Queenslander Ian Bone with a second round TKO at CFC 19 back in December. This victory came after suffering his first loss at Legend FC in October, prior to the loss Whittaker was undefeated with a 7-fight win streak with victories over Corey Nelson, Ben Alloway and Nate Thompson.

This fight will place the winner as the top welterweight in this country and when you look at the fight records of these men it doesn’t take long to realise that neither of them will want to leave their fight in the hands of the judges making it a very exciting matchup for the fans.

For tickets or further information call: